There have been an increasing number of public information initiatives of late in response to the recent terrorist attacks across Europe and the real threat of further terrorist attacks in the UK. These campaigns rely on the power of a few words to convey a strong message in an attempt to capture the public’s attention, influence behaviour and shape their responses but how effective are they? Can the word really be mightier than the sword?

The most recent of these initiatives is ‘Action Counters Terrorism’ (ACT) which uses a range of on-line media in order to communicate with the general public. The campaign asks people to take note of and report a range of suspicious activities and behaviours relating to attack planning and preparation. 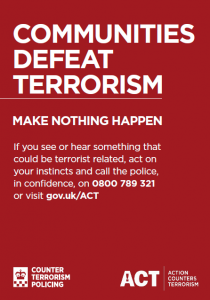 This initiative comes in the wake of ‘Citizen Aid’ which uses an app and a paper pocket guide to offer advice on how to respond to an active shooter, knife or bomb attack. This in turn was preceded by the Metropolitan Police’s ‘Run, Hide, Tell.’ campaign giving guidance to members of the public caught up in a complex attack. Meanwhile the British Transport Police have also weighed-in with two campaigns of their own. Firstly, ‘We Love Rush Hour’, promoting security awareness amongst the commuting public and secondly ‘See it, Say it, Sorted’, encouraging passengers to report unattended bags or other suspicious items found on trains or in stations.

So how effective are these initiatives and are they an appropriate way of achieving the desired effect?

There is of course a danger that a plethora of separate campaigns may only serve to confuse rather than inform. The alternative being one overarching national campaign built around a common theme and perhaps offering greater clarity.

The content also varies in terms of depth and complexity. Some provide basic three-point guidance while others offer a greater level of detail, such as Citizen Aid, perhaps straying into areas where basic guidance rather than formal training is simply not effective. Citizen Aid for instance talks about life saving medical assistance, including the use of tourniquets, which in reality, requires formal first aid training if it is to be delivered safely and effectively.

It also seems that most people are simply not aware of these campaigns, even people within the key target groups such as commuters or those living in major UK cities.

So, in short, any public information campaign would surely benefit from being UK wide, built around a common theme and brand. It should focus on single, simple messages around security awareness and behaviours, as is the case of ACT, but avoid entering into more complex areas where a deeper level of understanding and specific skills are required.

Where more complex interventions are appropriate, perhaps for key or vulnerable personnel, these should be addressed through more formal programmes. Project ARGUS, a UK Police initiative which is a contact learning based two hour training package, is an excellent example. It addresses responses to complex attacks in public spaces. For organisations that qualify, this programme is excellent and for those that do not, commercial versions are available from organisations such as ours along with relevant basic first aid and trauma training.